What is a command line and a package manager?

First of all, what is a command line or command prompt in Windows?

A command-line interface or command language interpreter (CLI) is used to execute commands within the terminal window, typed in by the user. Most of those commands are used to automate tasks via scripts and batch files.

You can then use various commands such as

How do I launch launch The Command Prompt From The Run Window?

One of the quickest ways to launch the Command Prompt is to use the Run window (press Win+R on your keyboard to open it). Then, type cmd or cmd.exe and press Enter or click. The Terminal window pops up and shows the C:\Users\DeafDave which is the starting point.

A shell is a user interface that gives you access to various services of an operating system. A shell can be command-line based or it can include a graphical user interface (GUI). Windows PowerShell is a  powerful shell developed by Microsoft. This PowerShell is much more powerful than the command prompt and is used for task automation and configuration management. This shell is based on the .NET framework.

There is also the Windows PowerShell ISE, a graphical user interface . ISE stands for Integrated Scripting Environment which allows you to easily create different scripts without having to type all the commands in the command line. 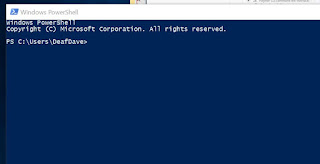 The fast way of launching PowerShell is to use the Run dialog. Press Windows + R keys on your keyboard to open the Run window, enter " powershell" inside and then press OK.

What is a package?

A software package manager installs the packages you want to use and provides a useful interface to work with them from your PC.  npm is one of the most popular software managers and makes it easy for you to share and update files with your co workers. To use npm, you need to have Node.JS a Chrome's JavaScript runtime module.

Bower is a Node module so to get it. You need to install npm and Git applications on your computer. Bower packages are Git repos. Bower uses Git to understand where the package is, what version it's on—that sort of thing.

npm
node package manager for node.js. npm is a NodeJS package manager. As its name would imply, you can use it to install node programs. Also, if you use it in development, it makes it easier to specify and link dependencies.

More on them later.

Over and out!
Deaf Dave.